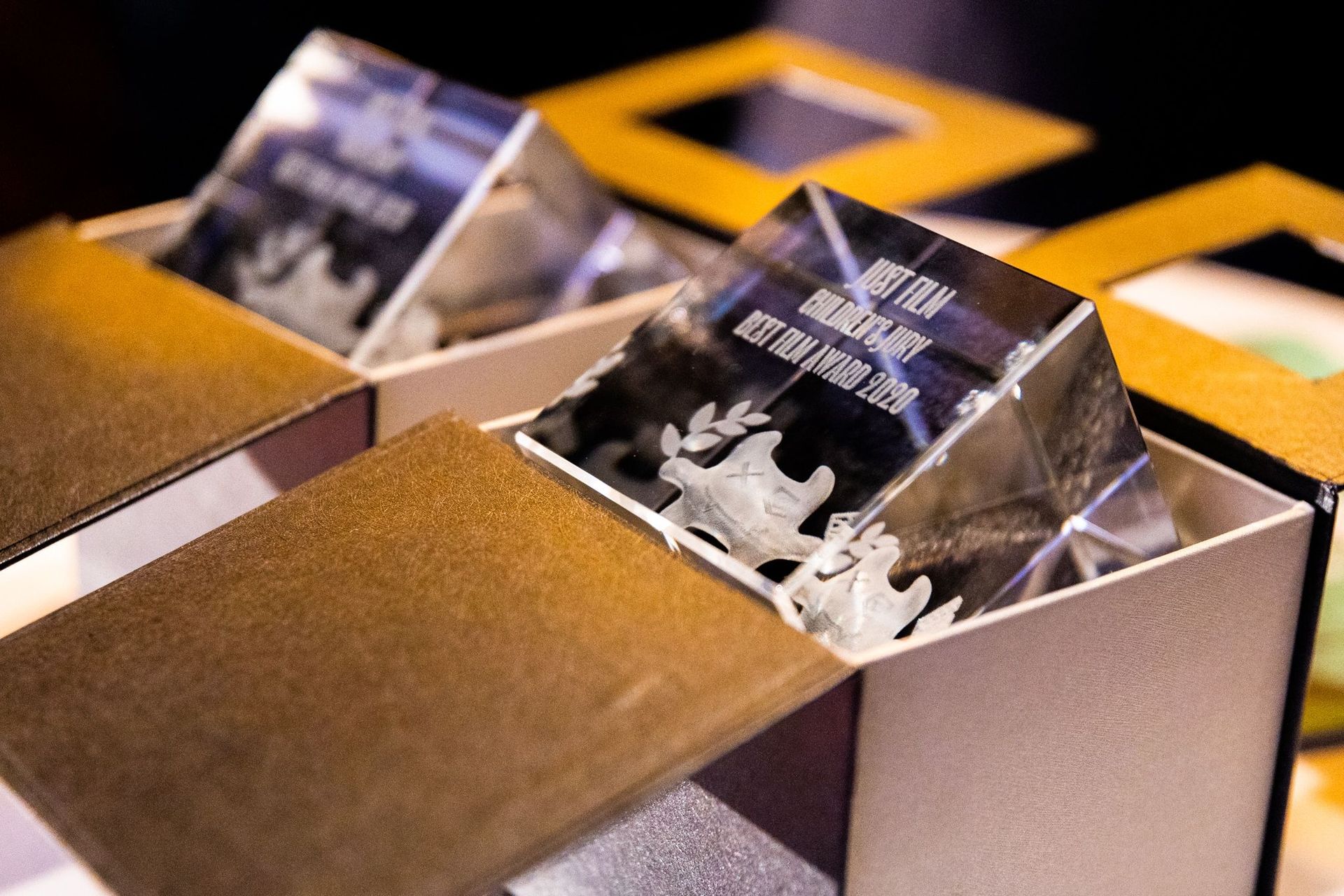 Youth and Children’s Film Festival Just Film is the biggest sub-festival of Tallinn Black Nights Film Festivals. It is held during the main programme 11.11.–27.11.2022.

Just Film was founded to give children and youth the possibility to see through film what happens around them and around the world. The aim is to show kids the critical points of society and to make them more understanding and empathic.

Films eligible for the programmes are feature-length (50 minutes and over) either fiction or documentary and short or half-length films (up to 45 minutes), produced after the 1st of January 2021 with a minimum requirement being their Estonian premiere.

The festival reserves the right to evaluate eligible films for competition on a case by case basis.

The applicable screening copies are in DCP format in English or include English subtitles. Films in the competitions may be presented in the PÖFF main programme non-competitive section.

Applicants for Competitive and Non-Competitive Programmes are requested to submit as a subcategory of Black Nights Film Festival through FilmFreeway:

Entry applications submitted by post, e-mail, or any other form except the online submission form are not considered eligible for selection, unless with prior agreement with the Festival Programming Committee.

Submission applications are accepted from March 2022.

The Festival reserves the right to select films received at any time and through any means, or process and to refuse late submissions.

By submitting a film to the festival the applicant agrees by the submissions deadline to:

1.3. Confirmation of films and reimbursement

Upon selection of the film, the Festival will inform the applicant no later than 1st of October 2021.

The applicant agrees that confirmed titles may not be withdrawn from the festival programme after its participation has been officially confirmed and the producer or producer’s authorised representative has verified the confirmation of the film to the programme.

If, for exceptional reasons, the film has to be withdrawn three weeks or less before the opening of the festival, the applicant agrees to reimburse all costs to the festival related to the confirmation and programming of the film including screening fee (when applicable), print delivery and handling costs as well as associated travel costs for the film delegation.

The invoices for the film rights or print loans should be issued and delivered for payments no later than two months after the end of the festival. The festival does not accept or reimburse invoices issued after that date.

Upon confirmation of the film to the Festival’s competitive or non-competitive sections, the applicant agrees to:
Deliver additional promotional materials (biography, filmography and headshot of the Director, high-resolution stills of the film, synopsis, logline/tagline and genre of film, list of technical and artistic credits, list of all production countries in order of contribution and large format print quality poster art-work). Full electronic press kits are preferred.

The approved requirements of the promotional photos for the Festival are the following:

Provide an HD resolution trailer or an HD teaser clip of the film either as a public link to a downloadable and embeddable video on YouTube or Vimeo or as a separate file. The Festival should receive the trailer or teaser latest by 1st of October, with an allowance to upload on the Festival’s online channels.

Provide a set of at least four different HD resolution excerpts of three-minute maximum length each to enable the promotion of films by television stations and in creative promotional video montages minimally a month before the Festival.

Provide subtitle files with time-codes and/or dialogue lists in the original film language and in English, spotting list and a screener of the finalised version of the film.

The Festival reserves the right to use all provided promotional materials for publicity purposes and printed materials, including the Festival catalogue, press releases, website, social media channels and promotion in media.

The materials required by the Festival for its press releases, catalogue, website and other information/promotion channels (synopsis, technical and artistic credits, bio-filmographies, pictures of the director/s and film stills) and materials for local translation need to be provided to the Festival by the 20th of September 2022, or within 7 days of confirmation of the film.

If the applicant doesn’t provide the materials required by the Festival by the date set in regulations or by the date agreed with the Festival beforehand, The Festival Director and the Programming Committee reserve the right to withdraw the film from the competition.

The accepted screening format for all films in competition and non-competition sections is DCP. Provided DCPs must be DCI compliant (http://www.dcimovies.com/) and adhere to all applicable conditions below.

The Festival will provide a CineSend link for uploading the DCP and it should be uploaded no later than 24th October 2022. DCPs must be provided with the correct naming according to the ISDCF DCP Naming Convention.

All films selected for the Festival must be provided with English subtitles, unless they are already in English. The Festival reserves the right to translate a selection of films into Estonian.

The Festival prefers to transfer local subtitles onto DCPs for ensuring the best possible screening experience. For that purpose DCPs must meet the following requirements: provided screening DCPs must be unencrypted, or with DKDM for Festival lab, as original language versions (OV) with separate accompanying subtitles as version-file packages (VF).

If the transfer of translated subtitles onto the DCP is not agreed with the representative of the film, the translations will be shown electronically.

All screening copies for all sections, if provided with any subtitles, must have the subtitles on the active picture area and not in the letterbox area. Please note that the image may be cropped by up to 3% during projection, due to the position of the projector and the venue’s characteristics, therefore a good safe area for the subtitles would be at least 5%. Dubbed language copies are also refused.

The Festival reserves the right to demand new DCP packages free of charge in case of non-compatible DCPs, broken hard drives, or other quality standards are not met. These include wrongly placed or missing subtitles, or wrong soundtracks.

The producer or film representative is requested to provide appropriate screening KDMs valid from 7 days before the start of the Festival and 1 days after the Festival, but not later than 72 hours prior to screenings, and 48 hours after the screening. The cost of generating all KDMs will also be the responsibility of the producers or representatives of the film.

If the Festival is provided with broken or wrongly assigned KDMs, appropriate new KDMs must be provided free of charge by the film submitter or representative. Quality assurance purpose DKDM is not exempt from providing screening KDMs if not agreed upon otherwise.

The Festival supports 2K and 4K content. However, not all screens have a 4K screening capability. The Festival therefore cannot guarantee that all 4K films will be screened in a 4K resolution.

We can accept high-frame-rate (HFR) or 3D DCPs, however, we are only able to screen them in selected cinema halls. Please notify the Festival office if you are planning on presenting a high-frame-rate DCP.

If agreed previously with the Festival technical department, DCP can be handed in on a physical hard drive. DCPs must be provided and shipped on industry standard and protected hard drives. Consumer-grade hard drives and memory sticks are not permitted.

Video formats and 35mm prints are accepted only with prior acknowledgement from the Festival. All video files will be converted into DCPs by the Festival appointed lab to ensure the best possible image and sound quality during playback. Only ProRes, ProRes 444, ProRes HQ are accepted video formats in these cases. Tapes or Blu-rays are not accepted as screening formats, unless there are no alternatives and with prior acknowledgement from the Festival.

The festival reserves the right to refuse and withdraw the screening of the film from the competition or any other section if all requirements are not followed.

Our festival’s technical team, dcinema@poff.ee, will happily help with any queries for all confirmed films.

All films that agree with online screenings must present the film in H264, 1920x1080p video format with stereo sound. In this case, we recommend a clean film file without hardcoded subtitles. The subtitles, if needed, must be presented as SRT or XML timed subtitles.

Public screenings for audience in Estonia are geo-blocked outside of Estonia and can be limited to an agreed size of the audience.

All films that agree with online screenings must present the film in H264, 1920x1080p video format with stereo sound. In this case, we recommend a clean film file without hardcoded subtitles. The subtitles, if needed, must be presented as SRT or XML timed subtitles.

The Festival reserves the right to refuse and withdraw the screening of the film from the competition or any other section if all requirements are not followed.

Our Festival’s digital cinema team, dcinema@poff.ee, will happily help with any queries for all confirmed films.

All packages must be clearly marked with the title of the film, the sender’s / submitters name, return address and telephone number as well as the festival address:

Costs related to the shipping of the screening copies to the festival are paid by the festival, unless otherwise agreed upon. Return shipping costs are the responsibility of the submitter or film representative, or party appointed by them.

The festival will return or forward the screening copies within 14 days from the end of the festival unless instructed otherwise by the submitter or film representative. Returns before the Festival closing date must be agreed at least three weeks before the festival, and cannot be guaranteed after that.

The festival covers all expenses connected to the storage and insurance of the screening copies during the duration of the festival.

In the event of damage to a copy during the event, the Festival limits its responsibility to the cost of having a new standard copy made at current laboratory rates.

For competitive programmes the Festival will invite one representative per film. The festival will cover the round trip airfare either fully or partially depending on the cost of the airfare for one delegate, with a preference given to the Director and/or a Main Cast member, as well as accommodation for 1 guest in the Delegation at the Official Partner Hotel.

For non-competitive films, the Festival reserves the right to invite guests upon the decision of the Programming committee. Detailed terms and conditions for film delegates are provided on a non-disclosed one to one and guest agreement basis.

Submit your film to the Youth and Children's film festival Just Film!
justfilm.ee