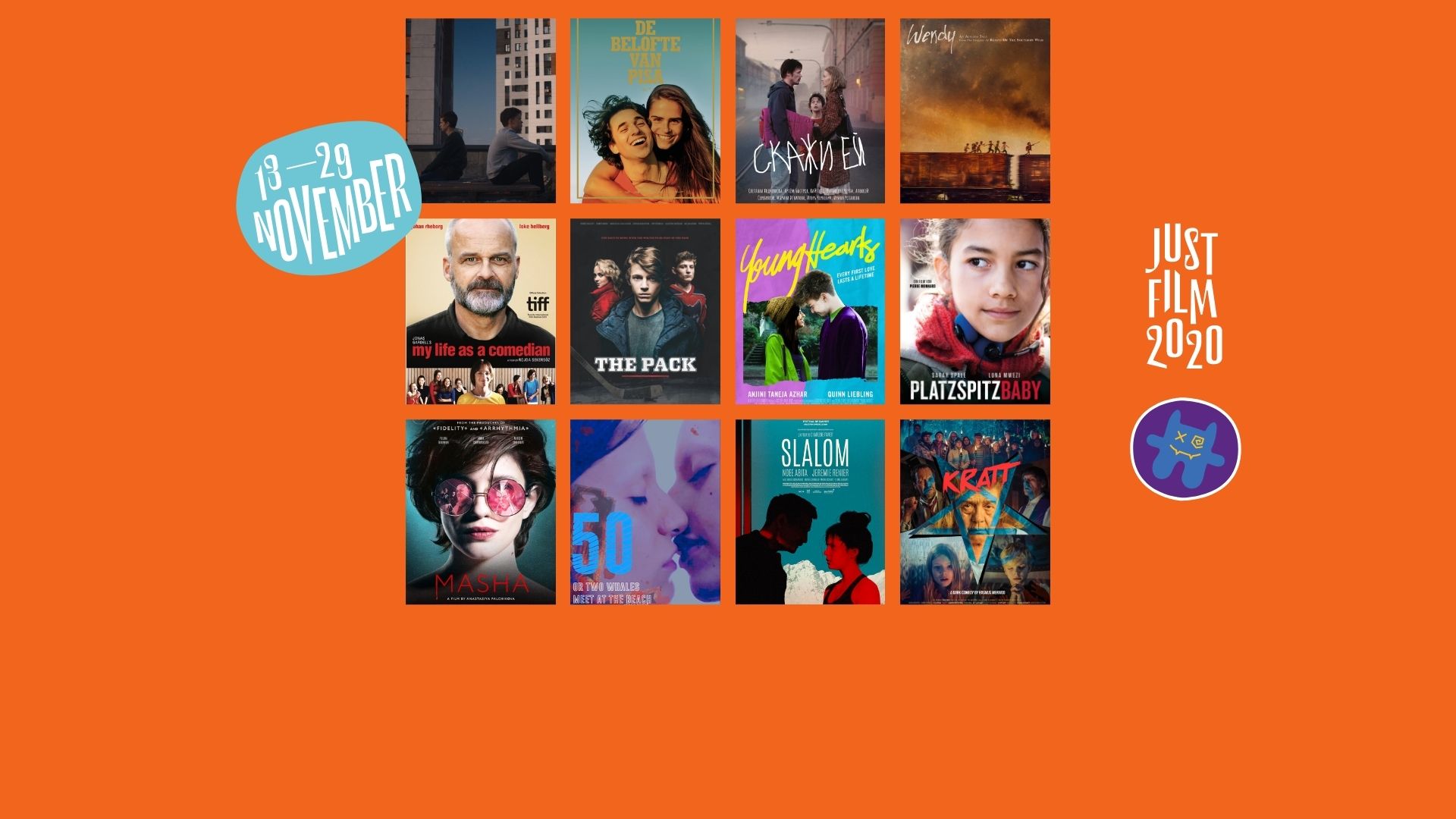 The second feature by Estonian director Rasmus Merivoo, who is one of the most unique Estonian filmmakers, „Kratt“ is a film which brings to life a known evil character from an Estonian book - Who probably no one knows? by Andrus Kivirähk. Merivoo’s film school short “Alien — saving Valdis in 11 chapters” became an instant cult classic because of its bold and original storytelling. After shooting his debut feature “Buratino” in Russia, he moved into TV to direct a season of the popular horror series “Süvahavva”.

A film by Russian director Pavel Mirzoev who is best known for directing the 2014 documentary „Zemlyaki“ and 2018 feature film „How I Came to Be..“. Graduated from VGIK (Russian State University of Cinematography) in 2008. Worked as a documentary filmmaker for 8 years and then switched to feature film. „Call Me Blackbird“ is his second full-length feature.

Mikk Granström, Just Film festival director said: "We are happy to say that despite the Coronavirus crisis and the difficulties it has created to the film industry we have been able to create a programme that lives up to our standards in every way. The films screened will, on one hand, show what the lives of young people were like before the crisis that shook the world, and on the other, reflect timeless problems such as first love, self-discovery, and relationships with parents and friends. The programme includes fresh and new films, to many of which Just Film is their first festival of the year. We are proud of the programme and believe that everyone, regardless of their age or background, will find a film to go and see."

In addition to the Youth Jury, the International Youth Competition programme will also be judged by a three-member International Jury who will announce the film that is worthy of the Just Film grand prix.

Members of the International Jury are:
Guy Davies is a multi award winning, versatile writer & director from the UK with a keen eye for visual storytelling
Elen Lotman is an Estonian cinematographer and the first Just Film festival director
Satu Tuuli Karhu is a 25-year-old actor from Finland. Karhu was awarded with a Jussi Award for her role in Tiina Lymis' box office hit Happier Times, Grump

Black Nights Film Festival's youth and children's film sub-festival Just Film will take place from the 13th of November until the 29th of November.

Spring 1995 - after the closure of the Needle Park and the public drug scene in Zurich, eleven-year-old Mia and her heroin addicted mother Sandrine are relocated to the countryside. While caring for her mother, Mia spends time with her imaginary friend and a gang of local teenage misfits. These friendships finally give her the strength to rebel and break free from her abusive mother.

The film is not recommended for children under 14

How to be a son, whose parents ask every day whom he loves more? Mother or father? How to be a mother if she madly loves her son, but circumstances compel her to take away the child from his father? How to be a father if his son is taken away to America forever, and he can’t imagine a life without him?

This is a story about choice. Parents who decide for their children more than often act as best suits them. The child agrees, afraid to cause pain, but time will pass and the child will mature and at some point decide for himself. Only for the parents this is a lot more painful.

A brainy fourteen year old embarks on an awkwardly heartfelt first love with her brother’s best friend while exploring her budding feminism and a gender double standard at their high school. Love is hard enough as a teenager - the excitement, euphoria, and even overwhelming pain. What happens when friends, parents, and maybe even the whole world doesn’t want them together? Can their love survive?

Félix, a 17-year-old boy, receives an invitation on WhatsApp: do you want to play the Blue Whale Game? The one with the 50 challenges? The one where you have to kill yourself at the end? Félix accepts. That is how he meets Elisa. They start completing the challenges together. 50 is a story of love between two suicidal teens who decide to play together till death do them part. Which is six days away.

The film is prohibited for children under 18.

15 year-old Lyz, a high school student in the French Alps, has been accepted to a highly selective ski club whose aim is to train future professional athletes. Taking a chance on his new recruit, Fred, ex-champion turned coach, decides to make Lyz his shining star regardless of her lack of experience. Under his influence, Lyz will have to endure more than the physical and emotional pressure of the training. Will Lyz’s determination help her escape his grip?

Film has both Estonian and Russian subtitles

Ice skates cut the ice. Silhouettes of hockey players swirl in the spray of the frost, and sharp scratches remain on the ice behind them. Talented goalkeeper David (16) is joining a new team. He will do everything in his power to make a name for himself in the Wolves hockey team. But the position of the current goalkeeper Miky (16) seems unshakable. In addition, Miky is the son of a coach. David really doesn’t fit in with the Wolves. Maybe it’s the small plastic box that pumps insulin into his body. But David will not be defeated by diabetes. He is an outsider in the team and faces an avalanche of bullying. Those who do not attack also do no not help. David tries to fight, but the result is even worse. Pushes, injuries and humiliations pile on each other like the spiral scars of tracks engraved by ice skates. What will David do?

Moroccan Sam is admitted to the prestigious Amsterdam Music Academy on the day that his older brother Mo is arrested by the police. At the posh school he is on his own, feeling utterly out of place. But his instructor pushes him to achieve greatness and he falls in love with the beautiful Annelies, all the time trying to get his brother out of prison. To find his own voice, however, Sam must first learn to listen to himself…

13-year-old Masha grows in the 90s in Russia between the boxing ring and the street. Her friends occasionally kill and rob people. The whole town hates and fears them, but for Masha they are the best people in the world who love and protect her. She sings jazz and dreams of becoming a singer. One day, Masha finds out who her friends really are and what they have done to her life and family. Having matured, she leaves her small hometown for Moscow, trying to break away from the past. But it overtakes her and brings her back to the place where her childhood passed away.

Wendy and her brothers come from a warm working family. Raised amongst dinner plates and diner patrons, the children have an itch for the adventurous and slightly mischievous. After long nights watching trains rattle by their bedroom window, the kids are whisked away by a mysterious boy named Peter. A long journey taken on faith lands them on Peter’s island. There they discover a wild new world, one without grown-ups and suspended in time. Reveling in their youthfulness and sprawling freedom satisfies the kids at first, but nostalgia for their lives left behind seeps in. When threats to their eternal childhood develop, Wendy is tasked with saving herself, her brothers, and the other island children with the most powerful tool she has: love for her family.

Film has both Estonian and Russian subtitles

From the first look Kostya “Cat” Sukhoveev is an ordinary 15-years old boy. He doesn’t do very well at school, his parents are in the middle of a divorce, and he doesn’t have many friends, until one day he finds one online…

Children are left to grandma’s without smartphones. Real life seems boring until they find instructions for kratt - magical creature who will do whatever its master says. All they have to do now, is to buy a soul from the devil..

“My Life As A Comedian”

Juha, 12, class clown in the suburb of Sävbyholm, Sweden. To be funny is the only thing he is good at and all he wants is to fit in the social peckingorder at school. As an adult, Juha has found success, performing the show – My Life As A Comedian - to sold out theatres where he tells the horrid and funny stories from his childhood to a delighted audience. When he gets an unexpected visit from an old friend from school, Juha is forced to return to Sävbyholm to deal with his past.